LC Queisser presents a solo exhibition of the late Georgian artist Tamaz Nutsubidze (1940-2002) at Echo, Cologne, showing the reunited tapestry series Seasons of the Year, 1988, together with rich archive material. Unique samples of the Soviet-era tapestries were rediscovered Summer and Autumn, alongside Spring, that was reclaimed. Its significance in its absolute emancipation from the diachronic context of decorative textiles and imposed forms of representation is proven through the abstraction of the quintessential seasonal motif. Initially composed of four corresponding pieces, only one of which – Winter’s whereabouts are still uncertain, through the efforts of LC Queisser, three original tapestries were reunited. Echo owes the pleasure of showcasing the three originals together for the first time.

To escape the rigid Soviet grip on Fine Arts, enforcing socialist realism and its pictorial solace, many found shelter in the Applied Arts field due to the loophole in the hierarchical dispositioning of art forms. This was a fresh breath of a long weaving tradition, redefining the heavily industrialized medium to become more artistic and contemporary in form while going back to the roots of the folk practice, analyzing its aesthetic value, semantics and Georgian identity codes. Nutsubidze suggests tapestry as essentially a flat form of painting, appreciating the duality of the medium in its practical and ideological sense, allowing his works to go beyond decorative, although not forcing painting techniques on a Gobelin as Nutsubidze rejects the realistic dimensional technique, distancing himself from the figuration and Soviet craze of depicting perspective. Lack of systemization of carpets’ ethnic origin in Transcaucasus, accompanied by the cultural assimilation of the Soviet era, causes the XX century domestic tapestry, as a modern interpretation of the folk carpet, to become more and more culturally crossbreed and therefore contextually abstracted.

Being regularly exhibited around the Soviet Union, Nutsubidze’s practice shows Baltic influences; Thus the common theme of time, recurring in many Baltic works, particularly in Latvia, also appears within Nutsubidze’s oeuvre, concerned with circadian rhythms. The visualization of time is in gradual metamorphosis throughout his practice. The artist explores the phenomenon of gradation, opposites, and the quintessential unity of the passing, present, and future moments. To show the recurrency of episodes between Seasons of the Year the designs are reconstructed in alternating color blocks. From the Mathematical principle of multiplication involved in fiber weaving to the coloristic and spatial deconstruction of the infinite, the arranged linear strands of color, similar to verses of poetry, form a metaphysical rhyme of cosmic harmony. Strong blocks of color are kept hidden with a curtain-like layer of fine sisal knots, while bare-left constructivist accents create a strong frame, similar to analog film edges. This simple but astute use of knotting on the tapestry creates an illusion of a perfect gradience through dense transparent layers of hand-dyed sisal yarns. The experimental decision of texture puts the planar understanding of textile art to rest. Yet firm but extremely fluid, Nutsubidze shows an unconventional grasp of the medium.

Georgian tapestry has always had an exhibition and decoration purpose, utilitarian and artistic, intended for architectural interiors of public establishments. Starting from the 60s, this kind of applied art was supported throughout soviet nations; artistic tapestries mainly decorated public interiors, restaurants, hotels, public halls, and lobbies. With the growing demand for public decorations, Gobelin became essential, but more importantly, a synthetic medium, which allowed the artist to fully take over the space, from the interior architecture to the last miniature detail, mirroring the integral structural algorithm of a woven piece. Nutsubidze decorated plenty of memorable spaces: Restaurant Dariali, Tbilisi, Krtsanisi Government Residence, Tbilisi, Olympic Games, Moscow, Fedorov Ophthalmologist clinic, Moscow, Rustavi Theater, Rustavi, Center for Symphonic Music, Tbilisi. Sorting through his archives, we find photo documentation of interiors he curated and get a sense of his contemporary approach to space with the full hybridity of a multimedia artist. Alongside other experiments, he researched printing, reformulating techniques of traditional Georgian Blue Tablecloths, and designed book covers. 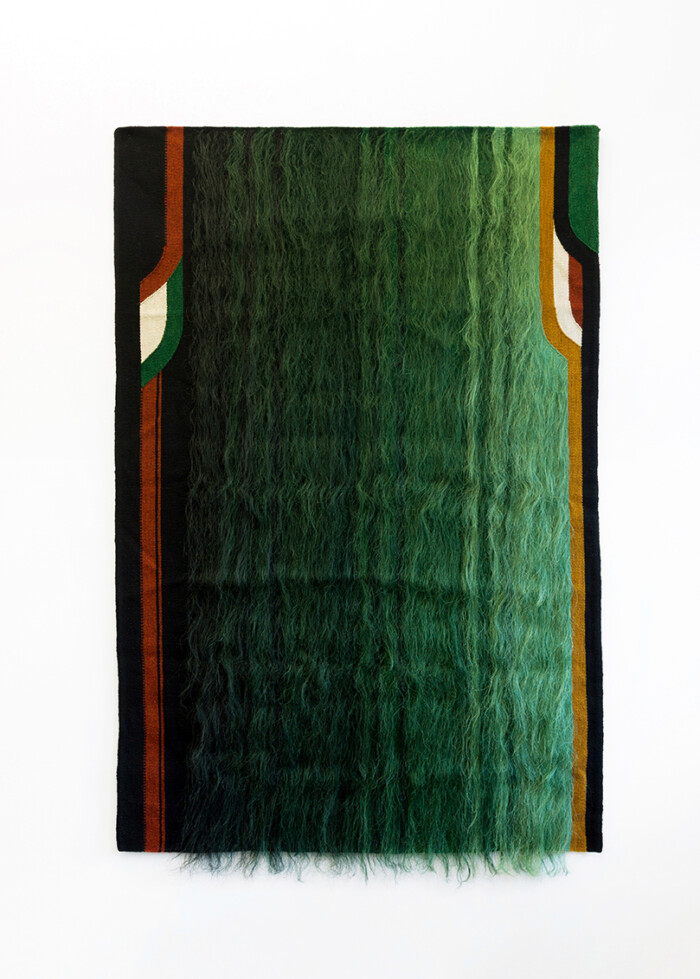